After losing consecutive games to William Patterson, Rutgers-Camden, Montclair State and TCNJ, the Rowan women’s basketball team stumbled to a 4-5 record since the start of the new year. The team now sits 13-8 overall and 7-7 in the New Jersey Athletic Conference with the regular season winding down.

The brown and gold dropped both games to the Monclair Red Hawks this season and saw themselves face a 21-point deficit in the third quarter of the second loss last Saturday. Junior guard Summer Crilley led the Profs on the road with 16 points while shooting 80 percent (4 of 5) from beyond the arc.

As far as the game plan goes, head coach Gabby Lisella said that Crilley hitting her shots is just as important as someone else getting hot, whether it be from inside the paint or outside.

“If we’re able to hit from outside, not just Summer but anybody, it stretches the defense out and creates more opportunities for us to attack the paint so they go hand in hand,” Lisella said. “One of our identity statements is that we want to work from the inside out. So, attacking the paint to be able to kick out and give our three point shooters such as Summer the highest opportunity to hit their shots, is very important to us.”

Crilley credits her teammates for helping her get going on offense.

“Aside from practice, my team is just really awesome at finding me, especially Val [Garofalo,]” Crilley said. “She’ll drive and she won’t have to know where I am. She’ll turn around and the ball will hit me right in the hands.”

Despite finding themselves in holes during third quarters the past three games, the Profs have shown some resiliency in the final quarter.

They have outscored their past three opponents, 80-70, in the fourth quarter after being outscored in the third, 86-67. Those opponents are also shooting 44 percent from the field as well as 40 percent from deep.

“I don’t know if we’ve done anything necessarily different. There are certainly things we can work on but it’s not anything that we’re in a panic mode about right now. We have confidence in our ability that we will wear teams down with the pace and style of our play. Anyone on our team can be a threat on any given night.”

The remaining games on their schedule feature teams who are within striking distance of Rowan in the conference. Rutgers-Newark at 5-8 sits two games back of the brown and gold, while The College of New Jersey sits only one game behind.

So, what is motivating everyone down the stretch?

For Crilley, it’s the excitement of thinking about the competitive and fun basketball that is coming up.

As for Lisella, she wants to make sure the team maintains focus not only for games but for practices as well, especially at a point of the season where her players aren’t so fresh.

Rowan lost to TCNJ on Wednesday night, 56-53. Crilley led the Profs with 11 points. 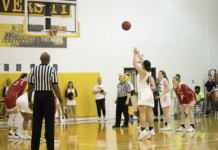