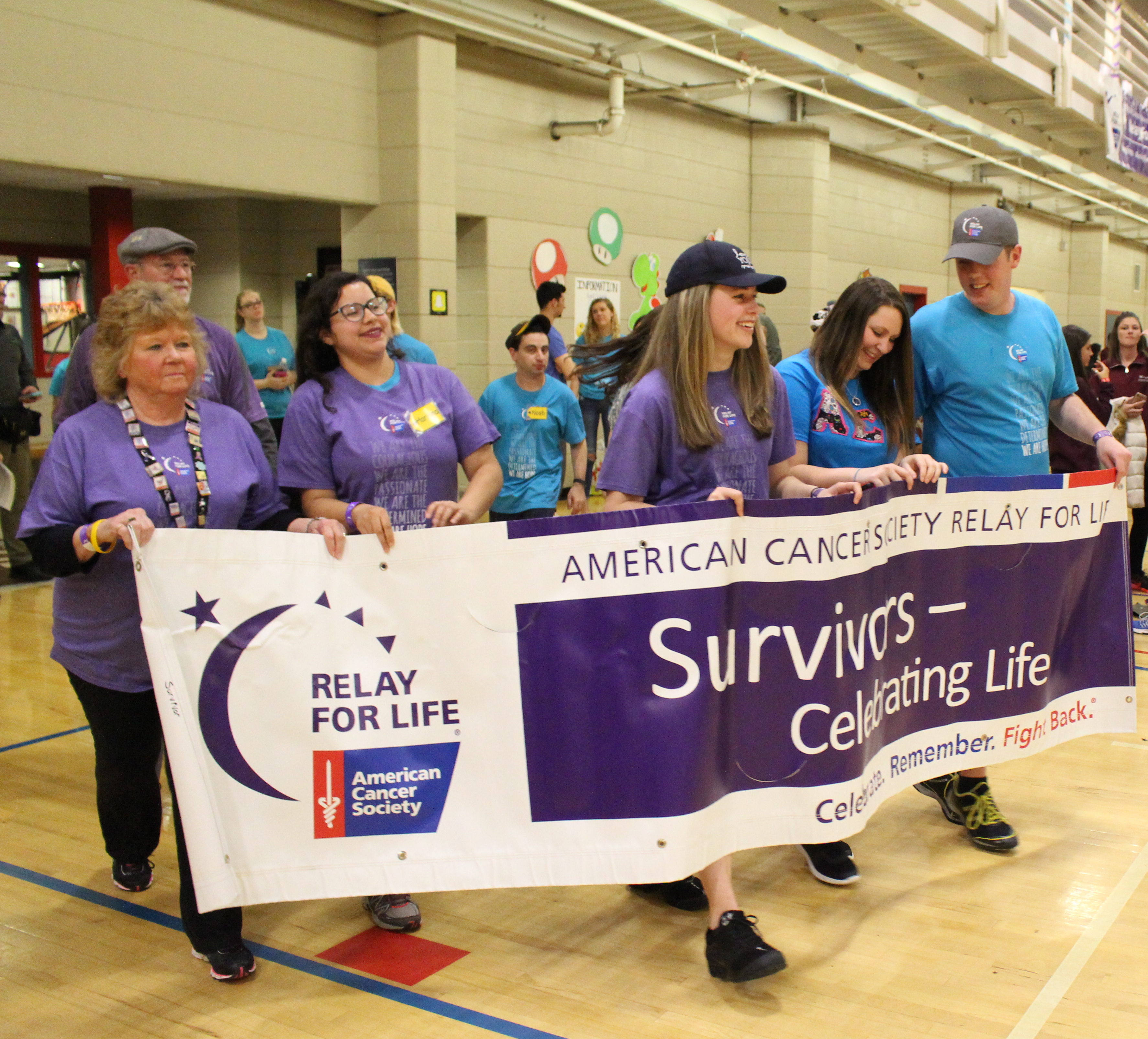 Hundreds of people gathered in the REC Center Gym to participate in Relay For Life, a 12-hour fundraising event which contributes to fighting against cancer.

The event, run by Colleges Against Cancer, began on Friday at 6 p.m. and continued until Saturday at 6 a.m. Throughout the night, there was music and dancing while participants walked around the perimeter of the gym, the latter of which the event is named for.

This year’s theme, “Game Over Cancer,” featured several games during the evening including a life-sized version of Hungry Hungry Hippos, song bingo, limbo and Minute to Win It. Some participants were also given the opportunity to donate their hair.

The event attracted hundreds of student participants, with some participating individually and others in groups. Many campus groups, including numerous Greek Life organizations, attended.

Like many who are part of Colleges Against Cancer, Lyons has a personal connection to cancer that drew her to Relay.

“What draws me to this event is that cancer has really affected me in my life and my family,” Lyons said. “When I lost my uncle when I was a senior in high school, I couldn’t find a way to cope. The first time I came to Relay, I found out I had a support system and there were other people like me that had to face this disease in their family. That’s what keeps me coming back is seeing the Rowan community come together.”

Relay For Life focuses on a heavy topic, cancer research and funding, yet remains an upbeat and hopeful event. The overall message also reflects a hopeful idea: one day there will be a cure for cancer.

Throughout the night, the games and music are paused every few hours or so to take a moment and remind people why they are at Relay For Life in the first place.

Attendees were also able to create luminarias, small paper bags with lit candles in them, honoring those who have lost their battle to cancer.

This year, survivor Mariana Cardenas, a freshman psychology major, spoke to everyone about her experience with childhood cancer. At the age of five, she was diagnosed with acute lymphoblastic leukemia.

“The doctors explained that my blood cells were turning against my own body and they would stop it with chemotherapy,” Cardenas said. “But as a young child, I learned what leukemia actually meant. It meant having to stay at the hospital all the time, even for Christmas. It meant my hair falling out. It meant being so weak from chemo that you can barely walk.”

After about two and a half years of treatment, Cardenas entered remission. However, about a year later, Cardenas learned her cancer had returned. Despite the difficulty of enduring chemotherapy, radiation and surgeries, Cardenas said the most upsetting part of her cancer was the effect it had on the people around her.

“What breaks my heart the most about my cancer experience is how much it broke my family. My mother became depressed and needed to be put on medication for it, and my sister lost a parent because I needed all of my mother’s attention,” Cardenas said. “Cancer didn’t just hurt me, it hurt my whole family.”

Now, Cardenas has been in remission for eight years. From the experience, she became an advocate to end cancer and is heavily involved in events and organizations like Relay For Life, even starting the event in her hometown.

This year, Rowan’s Relay For Life raised over $42,000 to donate to the American Cancer Society. Junior psychology major Casey Osterkorn, the survivorship chair for Colleges Against Cancer, was excited to see the club’s hard work pay off.

“The most rewarding part is seeing how many people come out for these events,” Osterkorn said. “Throughout the year, it may seem like a lot of people aren’t coming and we get discouraged, but standing on that stage and seeing that people couldn’t even walk the track because it was so crowded, that was just so amazing and it’s for a great cause. It’s crazy to see how many people cancer affects.”