Youth has been a centerpiece around the Rowan softball team this season, leading the Profs to an outstanding 27-8-1 mark as one game remains on the schedule.

Eight freshmen have played in at least five or more games for the brown and gold this year, but two have really planted their foot in Rowan’s softball system.

Leading the way with 32 starts in 35 games played is second baseman Sonia Sharma. Her .310 batting average is seventh on the team and her 14 RBI’s have her in sixth. She’s also one of only three players to have hit at least one triple and home run for the Profs this season, joining sophomore Jesse DeDomenico and junior Kristina Mueller. Sharma has also been solid at second base, showcasing a .950 fielding percentage and 55 assists, which is third on the team.

“Since her first appearance at second, Sonia has really taken over that position for us,” said 22nd-year head coach Kim Wilson. “She’s done a great job defensively. As far as offensively, she’s been very consistent. Sonia is almost a guarantee to get a hit every game. She is a smart baserunner and overall, just a very good athlete.”

Joining Sharma is outfielder Rebecca Lombardo, who has started 31 of the 32 games she has played in so far. Her .348 batting average is fifth on the team and her .430 on base percentage is sixth on the team. In the field, Lombardo has only recorded a single error in 19 total chances so far this season.

“Rebecca has been great for us at the plate,” Wilson said. “She’s still learning the outfield but has done great for us there as well. She is very hard on herself. She wants to be perfect which I have to remind her isn’t possible in this game. But her numbers at the plate for a freshman are very good.”

Also of note, first baseman KadyMae Makos has started nine of the 25 games she’s played in. Her .424 slugging percentage is sixth on the team, and apparently opposing pitchers hold a grudge on her, as she’s been hit by a pitch four times, the most on the team. Infielder Madison Petroski has contributed on the bases, as she’s second on the team in stolen bases with six. Pitcher/infielder Kelly Duffy has a 2-1 record on the mound, good enough for a 2.44 ERA in four total appearances for the Profs. She is batting .238 with five RBI’s as well.

“The young players are definitely coming along.” Wilson said. “I still don’t think we’ve come close to reaching our full potential as a team. That being said, I’m very excited to see when they do reach that pinnacle because I think we can be very, very good. I’m confident that we can continue to grow and be very successful in the years to come.”

Rowan is second in the New Jersey Athletic Conference (NJAC) with an 11-5 record, three games behind 14-2 TCNJ (26-6 overall). Rowan’s final action of the regular season is a doubleheader vs. Ramapo College at home on Saturday. The first game will start at 1 p.m. 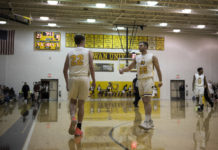