Anyone who knows sports knows what a rivalry game means from a fan’s point of view. You hate the other team and love your team.

The New Jersey Athletic Conference (NJAC) is no different.

The Profs saw their first taste of conference action in a double header against Kean University. They split the series losing game one 2-12 then winning game two 3-1.

Of the teams 15 remaining games, twelve are against conference rivals. That’s fun stuff for a fan but something the team doesn’t take lightly.

“You come on a weekend and have a conference series, you have to bring you’re ‘A’ game and hit them with everything you have,” said senior pitcher Andrew DiPiazza.

DiPiazza is 3-0 on the season, grabbing the win against Kean.

Head coach Mike Dickson said he knows it’s exciting for the players, but from a coaching standpoint it’s nice knowing the other team so well and how they’ll come at the team to try to win. It works both ways though because they know what the Profs are coming with too so Dickson has his work cut out for him in the coming weeks.

The team’s ranking plays a big role in these rivalries too. D3Baseball.com has the Profs ranked seventh in the nation and the only NJAC team in the top 25.

Dickson has talked before how the national ranking causes the other teams to bring their best stuff. Conference plays seems to amplify that.

“I think everyone who plays you want to try and knock you off,” Dickson said. “If they’re in conference that means even more to them because that may be the biggest part of their season maybe they’ll say they beat rowan when they were ranked whatever they were ranked in the country.”

DiPiazza knows it too.

“[The NJAC] is known as one of the better conferences in the country so you just got to be aware the teams are going to be a little bit better,” DiPiazza said. “…we have a target on our back with the ranking and everything. Teams are going to come ready to play.”

Kokos thinks it affects the other teams more knowing they have to find a way to beat a team ranked higher than them but says the team has to focus on the game not the ranking. Other teams knowing they’re good helps build confidence but they can’t let confidence turn into cockiness. Dickson says he’ll notice this get to the team when they lose focus but is something they’ve seen and worked out.

DiPiazza and Kokos each have the same philosophy but have a different approach to their recent hot streaks. DiPiazza has been relying on his mechanics and keeping it simple while Kokos has been attacking his pitch early and being aggressive.

The Profs have a home and home with New Jersey City University on Thurs. and Fri. as they attempt to boost their NJAC record. 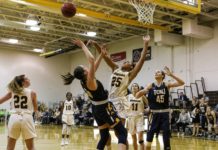 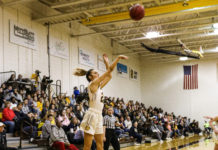