“As the days went by the tourists were just disappearing…at 9:30 at night, when the streets would usually be busy and people were going out, it was kind of like a ghost town.”

Marlee Chesler’s Italian experience as of late was not what she anticipated when she was admitted into a study abroad program. Arriving on Jan. 29, she studied at Florence University of the Arts (FUA) in Italy’s Tuscany region, and continued her education in psychology while experiencing everything the city had to offer.

An average day involved attending courses such as Cross-Cultural Psychology, Culture and Society in Italy and Intro to the Italian Family. After class, she might attend a local cafe, head to a museum or look out over the picturesque city. For the first month, it was everything she could have imagined.

But that slowly began to change. Information trickled in about the burgeoning coronavirus or COVID-19, as it is officially known, but Chesler didn’t worry. The virus had been contained to China, a world away from the beautiful landscape and rolling hills of Florence, Italy. As the virus spread outside of China, it remained a blip on the radar.

When cases began to crop up in Italy, Chesler wasn’t too concerned, even when fellow students in study abroad programs began to voluntarily return home. Besides, the faculty at FUA and the staff at the International Studies Abroad (ISA) program told her the concerns were overblown.

“I was personally not worried at all,” Chesler said. “All of the adults and authority figures — the teachers and staff — all believed that the media was blowing this a little bit out of proportion and causing panic. And they truly believed that we had not really much to worry about.”

While the faculty still recommended practicing proper hygiene and avoiding anyone who appeared sick, in many respects it was business as usual.

Chesler stayed in touch with developments back home and around the world through emails from the U.S. Embassy and on social media websites. The emails weren’t too alarming at first, but slowly began to rise in urgency. Italy had been designated a level one area of concern by the Centers for Disease Control and Prevention. No problem there; most cases were concentrated in Lombardy and Veneto.

To Chesler, it still felt like a distant issue.

As she sat in a cafe on Feb. 24, an otherwise unspectacular day, a CNN push notification broke through the serene atmosphere. The number of cases in Italy had just doubled. The entire country became designated as a level two area. The CDC simply recommended “practicing enhanced caution.”

Throughout her stay, she remained in touch with her study abroad advisor from Rowan University’s International Center, as well as family and friends. They were supportive, if not a little concerned for her well-being.

“I definitely kept in touch with my friends and family. My family was kind of glued to their TVs at home with the news. I’m sure they were worried. But they didn’t make it very apparent to me that they were super worried,” Chesler said. “They had no intention of telling me to come home voluntarily… they just told me to be very cautious and to keep updating them on everything.”

For about a week, conversations between the American students, who were enrolled in various study abroad programs, became dominated by fears of cancellation.

“In the span of a week, it seemed like every day something new happened and programs were being canceled,” Chesler said. “Information was being spread, not to panic and not to worry.” When other universities began recalling their study abroad students, Chesler wondered about her fate. Did Rowan have any plans to bring their students home?

She’d receive her answer in the middle of night on Friday, Feb. 28. The number of confirmed cases and deaths had risen again. The CDC had elevated the country’s designation to a level three. It was no longer tenable for the ISA to continue the program. Marlee Chesler would be returning home.

Her flight was scheduled for Wednesday, March 4. Although the trip would be coming to an unceremonious end, it wouldn’t be the biggest shock of the trip. Chesler’s biggest shock of all came at the airport.

“That was the craziest part. I arrived at the Florence airport very early because I was fully expecting screenings of some kind,” Chesler said. “Nothing happened there, security was normal. When I arrived at the Philadelphia airport, I had told my Dad to hold off on picking me up because I was led to believe that there was going to be so many screening processes and that I was going to be there for a long time. And none of that happened. Nobody tested me. Nobody swabbed me. Nobody even took my temperature.”

When Chesler went through U.S. customs, the guard asked where she was coming from, how long she had been there and what she had studying before waving her right on by. Amazed at the lack of screening, she immediately contacted her friends from Florence, who had all returned to various American cities.

To Chesler’s concern, not a single one had been screened after returning from the infected area.

“On the news, they were saying, if you’re coming into the airports, be prepared for all these screenings and to at least get your temperature taken and to go through all of these precautionary measures, and that didn’t happen,” Chesler said. “That really concerns me that none of that happened because, you know, I was in Italy for a whole month and it didn’t seem like anybody cared.”

If that wasn’t enough, it seemed the onus had been placed on the individual to reach out for help. Chesler has already begun her two weeks of CDC-recommended self-quarantine period. She hadn’t even been made aware of this recommendation until she reached out to her family doctor, hoping to be tested.

The test, by the way, never came. Her local doctor’s office has not been provided the means to test for COVID-19. This has reportedly been an issue in many parts of the country that seem underprepared for a global pandemic of this magnitude.

Chesler’s experience makes her wonder if the cases of coronavirus within the United States might be higher than the official count, currently standing at 340 confirmed cases according to John Hopkins University Center for Systems Science and Engineering. Across the globe there have been 102,472 confirmed cases of COVID-19, including 4,636 inside Italy. It currently has the fourth most cases in the world but the second most deaths at 197 confirmed deaths, according to John Hopkins University.

“I have a feeling that a lot more people have it than we’re able to see because we don’t really have the means to test people, at least on a large scale right now,” Chesler said. “The next best thing is for me to self quarantine for two weeks, instead of just getting tested, and wait for potential symptoms to pop up. And if they don’t, then I most likely don’t have it. It’s really interesting how our country seems to be handling this right now. It doesn’t seem too great so far.”

“We don’t have enough tests today to meet what we anticipate will be the demand going forward,” Vice President Mike Pence, who is overseeing the administration’s response to the virus, told reporters Thursday. This statement was directly contradicted by the secretary of Health and Human Services, Alex Azar.

“There is no testing kit shortage, nor has there ever been,” Azar said on ABC News Friday. “We will have, by the end of this weekend, over 1.2 million tests around America in public health labs as well as in private and commercial labs, and that is scaling up by the millions, ramping up rapidly.”

According to Chesler, Rowan University was helpful, offering to reimburse her flight home and free online classes to students who had previously been studying abroad. She won’t be taking the online courses, at least not through Rowan, as the ISA will allow her to complete her program online. Her credits will easily transfer and she intends to return to Rowan University’s campus in the fall.

According to an investigation of local testing data from all 50 states by the Atlantic, 1,895 individuals have been tested within the United States as of Mar. 6.

For now, all Chesler can do is wait until her two weeks of self-quarantine are up before she can completely reintegrate into American life.

When reached out to for comment regarding the university’s handling of study abroad programs, Rowan University’s Vice President for Media Relations Joe Cardona offered some clarification.

“There were 20 students studying abroad this semester. Of the 20, seven were in Italy. Six of the seven returned home as of last week,” Cardona said. “Right now, there are still students studying abroad. And because they’re third party providers, those programs have not closed down. Students have the choice to either walk away from their programs, or continue their programs. But since they’re offered by third party providers, all we could do is provide buffer support. “We’ve offered students the opportunity to sign up for online classes for free as a way to enable them to continue their education without losing any ground. We are following the CDC’s guidelines.”

Rowan University has not made any missteps in its handling of this process. For more information about Rowan’s handling of COVID-19, please consult https://www.rowan.edu/virusinfo/ . 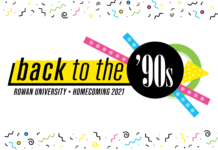