With no preseason games and numerous COVID-19 prevention protocols, the Philadelphia Eagles have been off to a rocky start this strange NFL football season.

With their first win over the San Francisco 49ers Oct. 4, the Eagles were at a 1-2-1 record, briefly putting them in first place in the NFC East division. This was until they lost to the Pittsburgh Steelers this past weekend, bumping them to second place.

But in recent years, it seems as though the team has found themselves in the same injury-prone situations every season. This underdog mentality is what led them to their first Super Bowl win over the New England Patriots in 2017. Why? We had a nice balance of young and fast players as well as seasoned veterans on the team.

In the last five seasons, the Philadelphia Eagles have made the playoffs twice: in their Super Bowl year and last year. Both seasons had young, fast players who had a drive to win, a fired-up quarterback making crucial plays and a coaching staff who took their team to the top.

One standout player that was promoted from the practice squad is running back Miles Sanders, who was promoted after the other running backs on the team got injured last season. He then ran for 818 rushing yards and 509 receiving yards with three touchdowns.

A key player we’ve come to learn about quickly this season is wide receiver (WR) Travis Fulgham. During Week 5, he was the highest graded wide receiver in the NFL with a grade of 93.0.

Fulgham, who came from the Detroit Lions, has played exceptionally well. In his last two games, he had 12 receptions for 209 receiving yards and two touchdowns. Not only is he fast, but he is fantastic at getting open for quarterback Carson Wentz to throw to him.

Having receivers that can get open and down the field will be the key aspect to the Eagles’ offensive success. They can start with having more players like Sanders and Fulgham.

This isn’t to say that the Eagles shouldn’t rule out older, more seasoned players altogether. They are called “veteran players” after all.

Defensive tackle Fletcher Cox, for instance, is a key player in the success of the Philadelphia Eagles defense. In his career, Cox has had 49.5 sacks, 249 tackles, and 11 forced fumbles in his 130 games.

Another player that has been pivotal when he could play has been WR DeSean Jackson. He is a highly skilled receiver who is also fast.

Jackson checks all the boxes of what the Eagles offense needs. His only problem is in his two seasons being back with the Eagles, he has been injured both times for a long period of time.

Would he have changed the outcome of the Eagles’ success in 2019 had he been healthy? Quite possibly yes, but to see yet another key player on injury reserve (IR) is bittersweet in the way that the Eagles can start their younger, equally-as-skilled players. This poses a question of who the starter will be when the player is healthy again. I think these are tough questions the Eagles will face for seasons to come.

Philadelphia is no stranger to adversity and injuries. In the 2019 season alone, 13 players were placed on IR, making them unable to play the rest of the season. In total, 32 players on the team suffered some form of injury, not counting Wentz’s game-ending collusion with former Seattle Seahawks defensive end Jadeveon Clowney in the first round of playoffs.

If the Eagles don’t want to face this same problem in the future, they would be wise to utilize talent that is less injury-prone as it has been a costly factor in their recent seasons.

I think it’s safe to say that the Philadelphia Eagles franchise should focus on finding younger talent in the future. The problem on the Eagles offense that we’ve seen so far this season is Wentz not being able to get the ball out quick enough, resulting in fumbles, sacks, interceptions and incomplete passes.

If the team utilizes younger and faster players, this will solve the issue, which could completely turn around the Eagles’ offense and overall confidence. The unknown players who helped give the team their first win this season did not have the opportunity to do so a few weeks back given that the team’s more seasoned players were starters. I think it will be interesting to see how Eagles Head Coach Doug Pederson responds once the current injured players get healthy again. 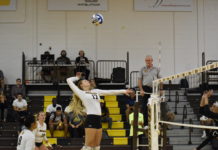 Volleyball Captain Lauren Horbacewicz on Preparing for her Final Season