On Saturday, Nov. 14, students received a Rowan Alert about a robbery that occurred around 12:30 a.m. at the 300 building of the Edgewood Park Apartments.

The announcement said there were four or five assailants; however, it only included a physical description for one of them. According to Rowan’s Public Safety, the investigation concluded that the assault only involved the one individual that the announcement described.

“I wasn’t home when it happened, but I know my roommate was worried about walking back home because we got told really late at night. The next morning there were cop cars all over the parking lot, which added to the worries we all had about how safe everything was,” said Amanda Holck, a senior radio, television and film (RTF) major and Edgewood Apartments resident.

Reed Layton, the senior director of public safety at Rowan University, said that the victim was a visiting student from Rowan College of South Jersey.

“The victim got beat up pretty good, and they ended up reporting to Glassboro P.D. Since it was on campus, Rowan Police went over and met with the victim as he was on his way to the hospital,” Layton said. “They called in a detective because it was an aggravated assault; he had some pretty bad injuries to his face.”

Layton said that the victim told the detective they only knew the accused by a nickname.

“According to the victim, [the robber] pulled a handgun on him and demanded his cellphone and wallet. That’s when we put the alert out,” he said. “We found out through the investigation that the suspect was a student living off campus. They were at a party or gathering when they got into a confrontation with the victim.”

At around 5 a.m., Rowan released a follow-up statement announcing a positive identification of the suspect described in the previous email.

According to Layton, the investigation proved fruitful as they were able to identify the suspect’s vehicle, which lead to his arrest.

“They found his car sitting out in the [Edgewood] parking lot. Because of the threat of a handgun, they didn’t want to cause alert to anybody, so they sat on the car,” Layton said. “They arrested him without incident, they did a search warrant of the car and apartment he was in, and they didn’t find a gun.”

Although searches didn’t yield a firearm, the suspect still faces charges of aggravated assault with a weapon and forced robbery with a handgun.

The suspect is currently incarcerated in Salem County Correctional Facility.

For students living in the Edgewood Apartments, it’s next to impossible to keep non-residents out.

“I lived in Edgewood last year as well, and there was some kind of hate message spray-painted on a girl’s door… You just have to remember Edgewood is accessible to the public, so I’m always [aware] of that fact,” Holck said. “We are all prepared when we go outside of the dorms, especially at night.” 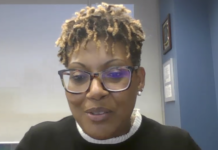